After Madhuban trial machine has shifted to Utsav Residency, Wagholi, Pune. There I gave the demo and I took a trial for 40 kg of kitchen waste.

Set -up has installed in this society

They liked the demo and asked for a quotation. The quotation has mailed.

After giving the demo to Utsav society, the machine has shifted to Woodland Apartments, Kothrud, Pune.

Where I gave the demo to them two times. The first-time demo was for 35 kg of kitchen waste. And they said to come for the next demo after 7 days where they can see a result of the first demo.

At the second time, the result of the first demo was so good. The second-time demo given for 80 kg of kitchen waste. This all settled in crates.

The result was as expected in 7 days was so great.

They said they will discuss in Society meeting and will let us know. I have mailed them a quotation. But they said the demo is very good but the budget has not sanctioned in this meeting.

After this demonstration machine has shifted to DIY Lab- Vigyan Ashram, Kothrud, Pune. For their canteen waste demonstration.

I have exhibited composting technologies in Vasumitra Organic Fair Exhibition. Presented our home composting unit in this exhibition. Lots of people has shown interest to buy this unit.

Also given a composting demonstration in home composting unit at Jay Ganesh Complex, Balwadi to my friend Mr. Utkarsh Salunkhe for their 12 flats apartment.

They asked for only 5 flats model. I have mailed them a quotation for both 12 flats and 5 flats also.

We have presented our composting technologies in Dassault Systemes at Hinjewadi, Pune.

Where we have exhibited our society composter’s poster and small home composting unit.

We have also exhibited Vigyan Ashram’s technologies in Techfest 2019 event of ARMIET college, Shahapur, Thane. We have presented our some projects like Aquaponics mini model, Micro Grain Unit, Nachni Roaster, Composter. Also, we have represented the DIC posters and Fabvillage concept of Vigyan Ashram. 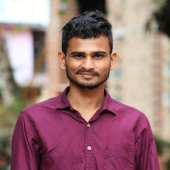 Troubleshooting of another Small composter…